I ran this race back in 2014 as a training run for Western States. Back then, I had a ton of training miles under my belt and had just run a PR 50K. That year, I ran this trail marathon in 5:20. This race was just a training run for me, so as long as I finished without wrecking myself, I would count it as a win.  I drove to the race and signed up just 15 minutes before the 8pm start! With some rain earlier in the day, I was hesitant to even sign up! I am so glad I did!

If you love trails, put the Marin Headlands on your bucket list for places to see. Whether you run or hike, this is a magical place you have to visit! There are plenty of races here to choose from too if that's your "cup of tea".

I had been running really well lately, with long runs of 25, 28 and 20 in the previous 3 weekends. I turned my ankle a couple times in my 28 miler, so I was extra careful with my ankle on any technical trail sections.

Early in the race, I ran to a fellow runner whose headlamp was terribly weak.  I was very concerned. I had an extra flashlight as my backup light, but I was initially very selfish. If my main headlamp ran out of batteries, I would be in trouble. I had not tested any of my lights for three years! After an internal debate, I decided to offer my extra light to the fellow runner. After all, "light was meant to be shared, right?" Super corny, I know. But it was those words in my head that settled the debate. I found out it was Randall's 20th marathon and that he flew in from Arizona to run the race. There was a chance that I had just derailed my own race, but I knew it was the right call. It was just a training run for me. Without my flashlight, Randall could have gotten hurt and his race would definitely be in trouble.  I was just doing what most trail runners would do; helping each other stay safe out there.

There were about 50 of us running the marathon. I had Strava running on my phone, but never looked at my progress. The miles ticked away almost effortlessly.  The night sky was brilliantly lit with the familiar glow of the moon and the stars. I turned off my headlamp whenever I could just to admire the night sky.  I wish I had a real camera with me, but no picture would do this world justice. There was magic in the air.  I felt so alive and strong.  I run-walked many of the hills and felt at peace with my effort level. It was still a training run, after all.

With about 5 miles to go, I caught up to a random girl who was running very strongly. After running alone for most of the race it was nice to follow someone. I wasn't sure I could keep up with her, but I was going to try. I zoned out and just ran as though it were a road marathon. And road marathons are supposed to hurt at the end, right? I eased into the "pain cave" which was more discomfort than pain.  And then it was all over, after 5 hours and 19 minutes. I was shocked with how well I did! And I felt like I could have gone on for much, much longer! What a wonderful run! I would have gone back out for bonus miles, but another fellow runner needed a ride home.  I received my snazzy wooden medal with pride and drove off into the twilight, feeling amazing. 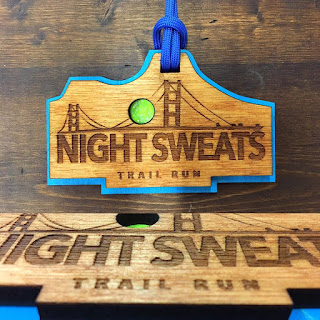