I have not run a road marathon in nearly 3 years. After reading numerous race reports from friends, I could not help but feel some "marathon envy"! I found that the race reports that contained a lot of suffering and hardship were even more inspiring than the flawless PR runs. Deep down, perhaps I knew that I would suffer just as greatly and that I would have to "embrace the suck" myself.  Feeling inspired, I signed up for the Morgan Hill Marathon.

My training was less than ideal with all the family problems we have been dealing with in the past few months (long story with my brother and mother-in-law, who both spent time in the hospital). And to top it all off, I came down with a cold a couple days before the race, complete with a cough and congestion. My plan was to run in costume as the Green Lantern, and no cold was going to stop me. 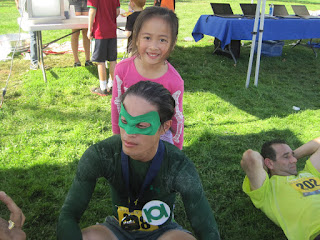 I started with the 3:40 pace group and really enjoyed their company. I thought I might be going too fast, but I figured I could bank some time and still squeeze in before the 4 hour pace group.  I walked through all the aid stations and had a blast.  Everywhere I went runners and volunteers cheered me on or told me how cool my costume was.  I felt like a celebrity! After 12 miles my Green Lantern symbol on my chest fell off. Double sided tape apparently loses its stickiness on sweaty fabric! Doh! After that people could not tell which super hero I was! It was a toss up between the Green Hornet and the Green Lantern! 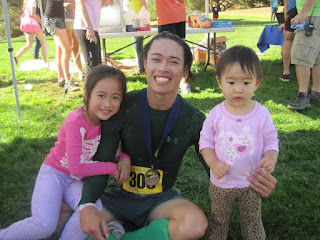 I passed the half marathon point on my Garmin around 1:52, but I was starting to slow down. It was hilly and it was getting warm. The wheels started coming off after 17 miles. Everything seemed to hurt and my energy was feeling very low. I began to make small deals with myself. Run to that tree, then you can walk. Walk to that cone, then start running again. And when I walked, I walked briskly and "with purpose". "Run till it gets too hard. Walk till it gets too easy." I was suffering, but I was still having fun. I cheered on my fellow runners and thanked those that cheered me on. When I was alone I recited the Green Lantern creed. "In brightest day, in darkest night, no evil shall escape my sight. Let those who worship evil's might, beware my power... Green Lantern's Light!" Of course, I could use a green lantern charging station right about then! After around 20 miles, I saw a man sprawled out on the concrete. There were cops and a crowd of people surrounding him. I knew there was nothing I could do to help and I could hear an ambulance in the distance.  I later found out that he was the 3:55 pacer and that he wound up in the hospital. Be careful out there! Hydrate well and listen to your body when you run your marathons! 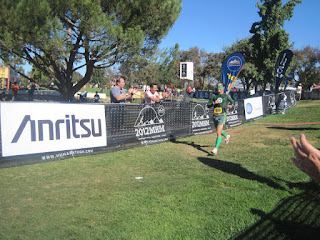 The final miles were a bit painful, but I finally passed the finish line in 4:07:22. I was a bit disappointed that I couldn't get a sub-4, but I also knew that with some better training, I'd crush a sub-4 marathon, even in tough conditions. My wife and kids were there to cheer me on at the finish line! But I was in such a daze, that all I wanted was to lay down in the grass under a tree. I was toast! The ending to the race was less than ideal, but I had a blast running my third marathon, as the Green Lantern! 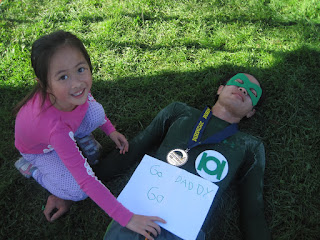 The race photographers took a lot of pictures of me during the race, but I did not like them enough to shell out so much money for them.