The Skyline 50K in is the oldest trail 50K in the country. This year’s race is the 29th edition of this historic ultra. It boasts 4750 feet of elevation gain and loss. The course is beautiful with majestic redwoods, scenic overlooks of , and wooded single track trails have a magical feel to them. It feels like you are transported to another time and place. 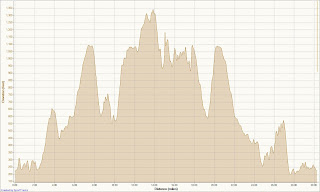 I would have signed up for this race earlier if I hadn't sprained my ankle 2 weeks prior to the race. The sprain healed very quickly with acupuncture and wobble board practice (highly recommended, especially for trail runners or folks with weak ankles). And even though my training hasn't been great in the past 2 months, the usage of a muscle stimulator (Compex Fitness Trainer) has really helped supplement my sparse running. 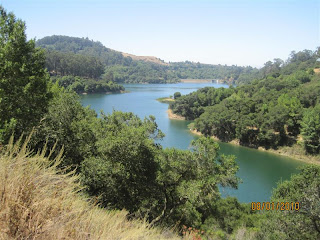 My last 50K was not done very seriously and I wasted a lot of time at the aid stations. I narrowly missed breaking 6 hours at that race (Quicksilver 50K), and I kind of regret my nonchalant effort there (even though I had a fun race). This was a chance to redeem myself. I knew that if I spent less time at the aid stations and ran the downhills strong, I'd have a chance to break 6 hours and maybe even beat by previous PR of 5:57. That was the "A goal", but it was more important for me to enjoy the nice weather, great company, and the beautiful trails. One of the great things about running is the people you meet. And in ultras, where slow and steady is usually a good thing, you can usually have some great conversations during a race without feeling like it will affect your performance negatively. In fact, it can have a very positive effect on your race. 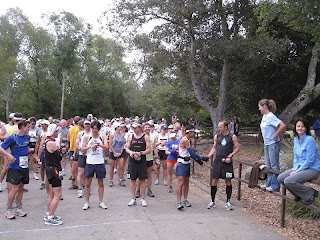 The race started at 7:00AM with 167 starters (40 rookies) and I was somewhere in the middle of the "pack", not paying enough attention to the race director as I probably should have. 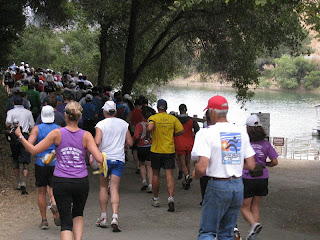 Here is the back of the "pack".

I befriended a bunch of runners, but most notably, I met an ultra veteran named Bob, and an ultra rookie named Lindsay. One has a rich history of notable Ultras like Western States and Leadville, and the other will be sure to improve and run many more ultras. Speed is all relative. Some of us were born to be fast and some of us not-so-fast, but on the trails we're all equal; just runners out for a good time. At one point Bob and I were talking about how races like this are like life in general. There are highs and there are lows. When you're out there long enough, you'll reach some lows where you'll feel pretty beat up and tired. Your calf might be giving your trouble (me), or your stomach might be gaseous and cramping (Bob), but you should expect that things can and often will go wrong. You can pull over and cry about it, or you can do something about it (like take Advil, electrolyte pills, drink more, or eat something), and move on. Whether you take it will a smile or a frown, some things you are just gonna have to deal with (like pain and suffering). 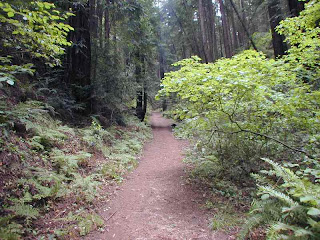 Two roads diverged in a yellow wood,
And sorry I could not travel both
And be one traveler, long I stood
And looked down one as far as I could
At mile 15, I met "two roads" and not knowing which way to go, I chose the wrong way, "in leaves no step had trodden black". The trail didn't feel right, and some non-racers eventually told me that I had gone the wrong way. I probably lost about half a mile, so it wasn't too much, compared to many of the horror stories I have read about. But will it be enough to derail my 6-hour and PR goal? I don't know, and at that point, I didn't care. I was still having a great time, and I wasn't going to let a little scenic tour derail my plans or my attitude.

I shall be telling this with a sigh
Somewhere ages and ages hence:
two roads diverged in a wood, and I --
I took the one less traveled by...
Runners do just that. We often take the road less traveled. And it does make "all the difference" doesn't it? By taking the road less traveled, we get to see things non-runners don't often get to see. And it can open our eyes to new wonders and discoveries in the world outside and even inside our own little heads. 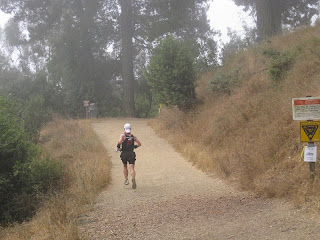 Here is Jean Pommier (2nd place) running up a hill after the midpoint of the course (somewhere after I took my scenic tour). It was foggy at some points early in the race. After a few hours it warmed up to around 70 degrees with plenty of sunshine. 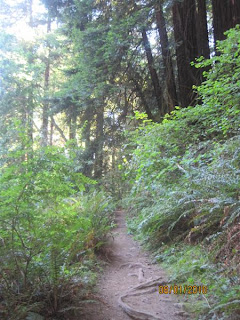 Before my little excursion, I chatted with Lindsay about the book, Born to Run, and how it motivated and inspired me to run ultras. It was her first ultra, and the hill we were hiking up was a fairly steep one. She wasn't using any electrolyte replacement supplements, so I gave her some of mine. One of the most common rookie mistakes, in my humble opinion, is not taking electrolyte replacement pills. Rapid elevation gain and loss can cause some major cramping, especially without the proper electrolyte balance. Gatorade and most electrolyte drinks don't supply nearly enough electrolytes for something as extreme as running ultra distances with ultra elevation gains and losses. After my chat with Lindsay I wished her luck and left Lindsay behind to chase my sub-6 finish. During my little excursion, Lindsay passed me back without even knowing it. If I had just stuck with her, maybe I wouldn't have make a wrong turn. Or maybe we both would have gone astray. Who knows? Life, like an ultra race, goes on. 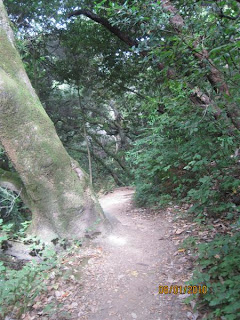 In the last half of the race, I had at least two energy lows that I recognized well and was prepared for with some gu packets that I picked up at the aid stations. I spent very little time at the aid stations, usually just to refill my bottle halfway and to grab some fruit (bananas, cantaloupe, and watermelon), and always had a gu on standby to combat those dreaded energy lows. I caught up to Bob around mile 24 (he was one of the many that passed me while I was "lost in never never land"), and he didn't look too good. He had a fun Friday night that involved alcohol and spent Saturday doing some tough yard work, which probably contributed to his malaise. I walked with him for short while to see if I could help him in any way. Knowing about my 6-hour goal, he tried to run with me, but had to stop and walk after a short running stint. With 7 miles to go, he told me that I had a chance at 5:30 and to go for it. I told him that maybe I could, but would it be worth it? On fresh legs maybe, but I was quickly running out of gas, and gunning for a fast time this late in an Ultra, with a twinge in my right calf, is a recipe for pain and disaster. I parted ways with my new running buddy, to chase my goals on some nice gentle downhills.

I could still PR if I could muster 12 minute miles for the remaining 7 miles. There were still some formidable uphills to deal with late in this Ultra, so 12 minute miles on dead legs isn't as easy as you would think. In the last 7 miles, I continued to calculate what I needed to PR. Mathematics is a great way to distract yourself from the fatigue that is inevitable in the late stages of a long race. With 2 miles to go, I made a few deals with myself. Run to that tree, then you can walk. Run to that ribbon, then you can rest. Once I got to the tree or ribbon, I would often run further just because I could. With some unexpected energy reserves, I ran most of the last mile and finished the race strong. I finished in 84th place, with a time of 5:54:23, for a new 50K PR. 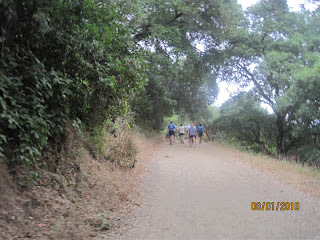 Congrats to all the Ultra rookies who ran their first Ultra, especially Lindsay, who came in 76th place with a time of 5:45. She gave me a hug and thanked me for the electrolyte pills at the finish line area. Those first ultras are ultra special. My fifth ultra was special too, thanks to new friends, great volunteers, and near perfect conditions. There were just too many blessings to count and people to thank. I got some free ART Chiropractic treatment on my calves which never became unmanageable. The BBQ looked great, but nothing solid appealed to me except fruit and some beer (there was a keg of some sort of black lager that wasn't too bad). I hung out and chatted with Bob and a bunch of other amazing runners for an hour before my 45 minute drive home. All in all, even with "the road less traveled", I had a great journey at the oldest 50K in the country. A cool looking bridge in the final few miles. 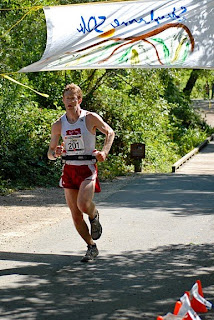 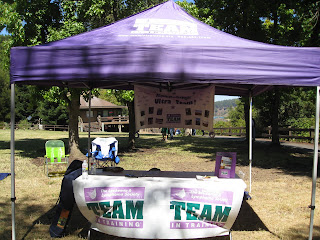 According to Jean Pommier this is the very first appearance of Team in Training on the ultra circuit.

Here are my mile splits if you're interested in that sort of thing. 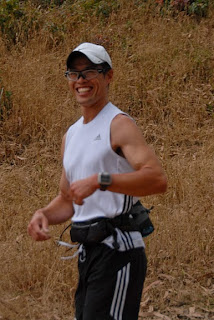 Here I am with a goofy smile from ear to ear.

Equipment, hydration, and fueling:
I took 2 servings of Vespa, one 45 minutes before the race, and one 3 hours into the race. I also took 3 servings of chia seeds, one bottle of "chia fresca" before the race and two servings mixed in with the aid station's electrolyte drink. I probably drank a total of 60 ounces of water/fluid during the whole race (and that's more than I usually drink!). I took about 3.5 Gu's, 2 shot blocks, 1.5 bananas, some cantaloupe, and some watermelon. I took 5 Saltstick electrolyte replacement capsules (one per hour). And I took 2 Advil (separated by a few hours for calf niggles/twinges). I wore my La Sportiva Crosslites and compression tights underneath some Adidas running shorts. I used a Camelbak one bottle waist pack, and started with no fluids in it (just my second serving of chia seeds). My second serving of chia seeds were in a separate zip lock bag in my waist pack.

Other ultra cool runners I talked to: Gillian Robinson and Don Lundell (owners of Zombierunner), Sean Lang (7th place finisher), Larry Bertrand (who must have been one of the two DNFs, because I didn't see him in the list of finishers, I was ahead of him at AR50 by about a minute!), Tony Verdon (In the 2nd half of the race, he would pass me on the downhills and I would pass him on the uphills. He's an ultra rookie, but I'm sure he'll be improving at this distance real soon), Dan Fabun (Another speedy runner I first met at Rodeo Beach 50K, and then he was a volunteer at Way Too Cool 50K), and Allisa Albert (who ran the Headlands Marathon only 2 weeks prior and was running very strong until running out of gas in the final miles).
Posted by John Nguyen at 8:41 AM