The Mokelumne River 50K seemed like the perfect opportunity for a long training run. While I was out doing this long training run, my wife and kids would be hiking at Folsom Lake with my in-laws and their kids. I got to the race at 5:45 in the morning, just 15 minutes before the start. I scrambled to sign up and get ready just barely in time for the start. It was just supposed to be a training run, so even though I was rushing through my preparations, I was not overly stressed.

I tapped Tony (AKA Endorphin Dude) on the shoulder and said hi just before the race started. This guy is always so full of positive energy. Ann Trason is coaching him, and he too is using this race as a training run! I miss Ann's coaching. She is simply amazing. Her kindness, her expertise, and her friendship makes you want to run better and smarter. I am a better runner because of her.

The race starts and I quickly settled into a comfortable pace. I look around and find myself in 6th or 7th place. Why is everyone going so slowly, I wonder? The 50K runners and 50 Mile runners start together, so I have no idea who my competition is, but it doesn't matter at the time. I make some small talk with the lead lady, who I recognize as Beverly Anderson-Abbs (a well known ultra speedster!). Her husband, Alan Abbs was running the 50 Miler, who is also an amazing ultra runner.

Bev was dealing with some knee issues, so wasn't as speedy as her usual self, but was still looking super-strong. I felt honored and inspired to be running with a local legend. And it was a beautiful day to be running!

I skipped the first aid station because I had plenty of fluids and calories to last at least 20 miles. I just kept Bev close and "zoned out", The hills were mostly rolling and not outrageously steep, so I ran up most of them. I had never run in this area before, but I had childhood memories of camping and fishing at this lake we were running next to - Lake Camanche. I remember thinking about how cool it would be to finish in the top ten - which is rare for me. I do not consider myself to be fast and have only placed in one ultra (a 12 hour night race where there were only 15 of us).

When we got to the aid station at mile 12.5, I was shocked when the volunteers told me that I was 3rd overall and 2nd man! I wasn't sure I wanted to know that. While it was an awesome place to be, there was still 19 miles to run! And it was supposed to be a training run! Do I put my game face on and dip into beast mode? Or do I run easy and focus on the original plan (so I don't wreck myself)? I was still feeling good, and the opportunity to win hardware was too much to pass up.  Game on.

In racing mode, I started to take mental notes of my competition both ahead of me and behind me. The course is an out-and-back course, so you get to meet everyone, especially those that you might be chasing and who might be chasing you.  1st place looked way out of reach at the turn-around. I had a decent lead on third place, but in a long race anything can happen.

Other runners I passed would comment on race position and cheer me on! I felt like a rockstar and an imposter! I don't belong in the top 3!  I was loving it, but also feeling the pressure to keep it up. I kept looking back to see if someone was chasing me.  Bev was still there just ahead of me. It was like having a personal pacer tow me along. I thought about racing Bev, and maybe even passing her near the end, but quickly dismissed the idea.  I was honored to have her there and didn't feel like pushing for an extra place in the overall standings was worth it. At mile 24ish, I took a couple extra minutes to fill my hydration pack.  It had gone empty and it was getting warmer.  That's when I lost Bev for good.

By mile 26, I started to feel the effects of all that "racing". Up until now, I ran up most of the hills. I let myself hike up some of the uphills. Running those hills, while possible, would surely wreck me.  And then it was all over. I finished in 5:20:07, 2nd man and 3rd overall. I was still in a state of disbelief and shock. I received my snazzy finisher's medal and a wooden spoon trophy.  It wasn't traditional hardware, but it didn't matter. The field size was small, but that too did not matter.  It felt like a dream, and it wasn't even a goal race. I won.

The Quicksilver 100K is coming up on May 13th. It won't be easy and it might be hot. I have no idea what will happen. It will surely be an adventure though and I like my chances with the training I have under my belt. Wish me luck! 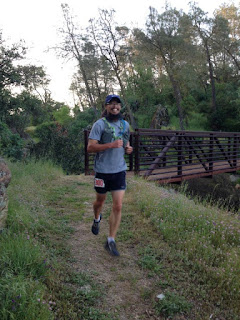