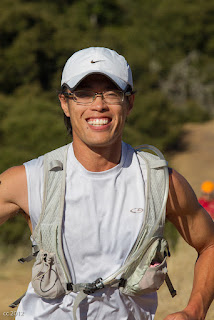 The Stevens Creek 50K took place on September 8th, and I am very late with this race report. Part of me wants to forget that it ever happened. It was slow. Really slow. My slowest 50K. Ever.

I ran out of Vespa, my performance enhancing "supplement" so I had none for this race. Consequently, my energy levels dropped dangerously low after about 15 miles. Apparently, I have trouble fueling normally at the aid stations! One of the highlights of my day was meeting a new friend.  His name was Mike, and like me, he is one of 6 kids.  And his Mom was also running in the race! I thought that was very cool. 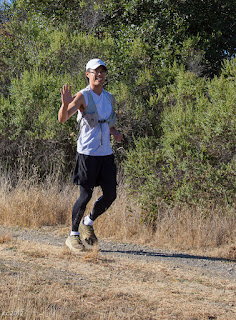 I turned/sprained my ankle after 16-17 miles.  I don't know exactly at what point I sprained my ankle, because I wasn't wearing a watch (my Garmin's battery was dead long before the race even started). So in addition to an empty gas tank, I now had a flat tire!

And to make things even more interesting, I made a wrong turn shortly after the sprained ankle, adding 2-3 extra miles (very rough estimate)!

By now I'm in either last place or next to last place. I kept trudging along and I was very tempted to just drop from the race at the next aid station (which happens to be the start/finish line area). After eating and drinking a little, I felt re-energized and got back out there to the last 11.5 mile loop, which I know is the most exposed part of the course (very warm). 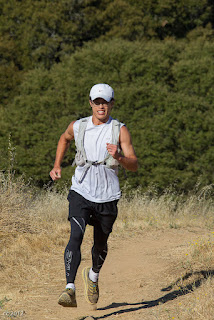 I moved relatively well for the first few miles, but then everything seemed to slow down again. My energy levels dropped again, along with my pace. I started to take sitting breaks, which I rarely do in any of my races. None of my muscles were cramping, which I found a bit strange. I knew it was fatigue and lack of energy that plagued me. I was planning on just dropping at the 25 Mile aid station at this point.  I did not want to suffer through another 6-7 miles of this suckfest. And then somehow I made another wrong turn, and missed the aid station! I probably cut off 2 miles from the course!

A runner named Sabrina caught up to me and passed me. She saw that I was struggling and told me a deliberate lie.  She told me that we only had 3 miles to go, when she knew we had at least 6. It worked. It injected a little life back into my run, and I tried to keep up with her.  I even passed her after a few miles.

I finally finished after 8 hours and 39 minutes. I told the Race Director to disqualify me for the wrong turn, but he refused.  I had added a few miles earlier in the race, so I didn't feel too bad at accepting the finish.

Out there in my times of misery I thought about my running friends who inspired me to keep going. I thought of Megan, who lost her Mom, and then went on to finish her first Ultra. I needed to "dig deep for Mom" like she did. And I thought about Keeley who is about to attempt her first Ultra in a few weeks. I want her to believe in herself and to forge a no-quit attitude. So I couldn't quit there! And to anyone out there who is tempted to quit midway through a race (or even before the race has started), believe in yourself, damnit! Dig deep, and banish that mental weakness that threatens to uproot your goals and your dreams. Don't make any lame excuses like "I'm tired" or "I sprained my ankle" (especially if you're not limping)! 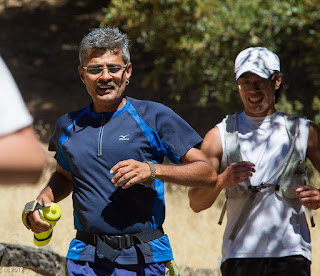 Other notes:
I've been icing my ankle almost every day. And I think I'm finally able to run on it. It is still a little swollen and tender, but I think it'll be at least 95 percent healed by next week.  I am considering a road marathon for my next race (the Morgan Hill Marathon, on October 28th). If I do run it, I think I'll run it in a Green Lantern Costume, just for fun.

And while driving home I threw up all over myself. I blame the carbonated root beer. After a hot shower, I curled up in the fetal position and passed out in bed.
Posted by John Nguyen at 3:17 PM No comments: