The people that come to the Born to Run Race Weekend are a mixture of humble, crazy, fun, inspirational, and all-around wonderful people. There was a 4-day, 200 mile, 100 mile, 60 mile, 30 mile, 10 mile, and 0.0 mile race! And yes, some people took the 0.0 mile very race seriously. There were archery runs, bolla races, a beer mile, a cartwheel challenge, wrestling matches, a talent show, a dirtbag prom, and lots of live music. I'm sure I left out plenty of undocumented shenanigans that took place over the long weekend. It was more than just a running event. It was a party. It was a family reunion. Arnulfo Quimare, and the Tarahumara were there. Christopher McDougall was there. Words and pictures only tell part of the story. Some things need to be experienced in person to be fully understood. Born to Run is one of those things. 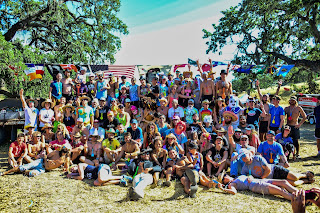 I arrived on the ranch in Los Olivos on Friday afternoon after a 4 hour drive from San Jose, California. I missed the archery and the bola races with the Tarahumara, which was a shame. I have fond memories of playing a shortened version of the Rarajipari game with the Tarahumara in my first Born to Run two years ago. Having the Tarahumara there amongst us is a special treat. And the legendary Arnulfo Quimare was there! He is the one that beat Scott Jurek in "the Greatest Race the World Has Never Seen", down in the Copper Canyons. Seeing Arnulfo speak to all of us was surreal. I wonder if he needed a few drinks to do that! And he was one of the judges in the Talent Show!

I met Christopher McDougall and shook his hand. And I told him how his book opened a door to this amazing world of ultras to me. I told him how it inspired and motivated me to run far, as though I too, was "born to run". Meeting Christopher McDougall and shaking his hand was very cool! My iPhone was having storage problems, so I was unable to take any pictures this weekend. Totally lame, I know! I have my memories though and there was no shortage of pictures from everyone else!

So there was a cartwheel challenge that was going to happen. It wasn't in my plans, but it made perfect sense at the time. I have always been pretty good at cartwheels. The rules were simple. Keep doing cartwheels, back and forth, until you cannot do any, anymore. Last man/woman standing wins. If you fall, you're out. If you take more than 10 seconds in between cartwheels, you're out. I lost track of how many cartwheels I did, but they got progressively harder. My lungs were burning and I was getting dizzy from all the cartwheels! I bowed out in 5th place. The college girls that won the event were animals! I could have sworn they were gymnasts! 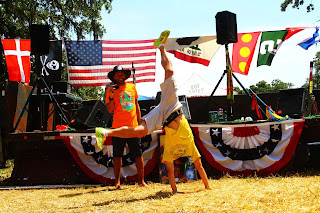 Next came a 1 Kilometer vertical challenge, sponsored by Patagonia! Sprint straight up a hill for cool prizes! It was tempting, but my head was still spinning from all the cartwheels. And there was still a beer mile coming up! I was content to spectate. There was no way I could compete with these trail studs anyway. It was a very intense scramble up the hill for the men and the winners scored a very nice Patagonia jacket! The short race did look like fun... 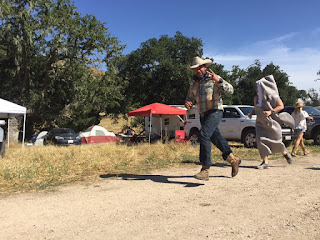 Here is Luis Escobar being chased by a shark in the Beer Mile!

Last year at Born to Run, I sat out of the Beer Mile. I felt undertrained and needed every muscle fiber available for the 30 mile event the next day. Watching it from the sidelines last year was tough, so I decided to do it this year, knowing full well that it could affect my race the next day. This was only my 2nd beer mile, having done my 1st beer mile at my first Born to Run two years ago. I chose Bud Light, just because I am not a seasoned veteran of beer chugging. I marveled at how hard it was to chug down the beer. I had to take burping breaks while drinking the beer, which never happened before. Perhaps my beers were extra gassy after being shaken up during the drive? Anyway, the beer mile was super hard and I almost threw up. I did record it on Strava, which had me running at a 7:22 pace when I was moving, and about 11 minutes for the whole beer mile. There was about 100 of us doing the beer mile! Good times! The beer mile left me a bit tipsy, but I was no where near "drunk". I was buzzed just enough to float around camp and enjoy myself without making an ass out of myself.

I listened to a special tribute to Akabill before the start of the 100 mile race, who had passed away unexpectedly in the past year. He was the one who crafted all the amulets that we received after our little adventures on the trails. He was always there at the bottom of the steepest hill to cheer for us and to take our pictures! That hill was fittingly named Akabill Hill, in his honor. He was an accomplished ultra runner with 100 mile finishes at Western States, HURT, San Diego, Angeles Crest! But what moved me most was how much his old cross country students loved him - like a father. I had a really cool father-like coach back in high school too. Luis Escobar (AKA, the sheriff and Race Director) is also a great coach and mentor from what I hear. It's no wonder that Akabill and Luis were such good friends. Like Caballo Blanco (Micah), Akabill will be missed by everyone he touched with his kindness, love and support.

I woke up Saturday morning feeling like I got hit by a truck. Okay, maybe not a truck. Maybe more like a professional linebacker. My shoulders, hips and hamstrings were sore. Even my right calf seized up in a cramp for a second! And I knew exactly why. It was the damn cartwheel challenge! My spirits sunk for a moment, knowing that my 30 mile race was going to be slower. I had no idea what to expect, but I wasn't going to let it bother me. If I screwed up my race, it was my own damn fault. 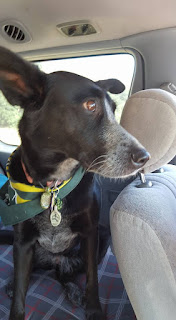 Waking up at 4:30AM to the sound of shotgun blasts was pretty cool. There was no way anyone was oversleeping and missing their race start. The 10 mile, 30 mile, and 60 mile race starts promptly at 6:00AM. Christopher McDougall leads us in the traditional Born to Run oath started by Caballo Blanco himself. Raise your right and repeated after Chris: "If I get hurt, lost, or die, it's my own damn fault." With that, Akabill's sister fired a shotgun and we were off.

My race was nothing special. I could probably describe it all in a short paragraph. I was happy to be consistent throughout the day. I finished in a respectable 6:07. Not too fast, not too slow. Pretty boring, if you asked me. I felt more like a spectator than a racer. I took no pictures (since my phone was having storage problems), so I was planning on borrowing lots of wonderful pictures from everyone else. I blamed the cartwheel challenge more than once, for all my lollygagging throughout the race. The race felt harder when the sun came out and it got warmer. The rattlesnakes must have woken up too, because I could hear a few rattles in the high grass once in a while. The most memorable and enjoyable parts of my race happened when I shared the trail with others. I loved hearing about others' inspiring stories.  And when I ran alone, my thoughts drifted to friends who shared these same trails with me in previous years. 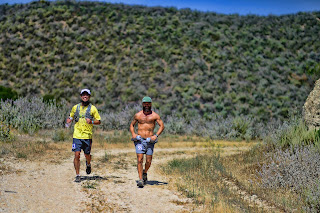 If you got this far in my race report, I strongly suggest you put the Born to Run race on your calendar. If a 7 year old can run the 10 mile so can you. A cute little 7 year old ran the 10-miler this year. A 9-year old boy ran the 30 miler. A dog also finished the 30 miler! There is no shortage of inspiration and support on the ranch. And there isn't much of a time limit either. And if you weren't "born to run", sign up for the 0.0KM race and come out to have a beer and see all the crazy people as they run around in circles while having the time of their lives.

"Life is good! And getting better..." -Akabill 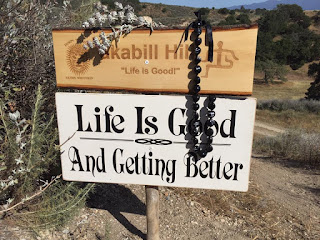 Interested in race results and where you'd stand?
Born to Run Race Results